In an intense and thrilling Budapest city derby MAC was leading twice but KMH came back and with 2-2 the two teams went into the sudden victory overtime. Which brought chances on both sides but ended without a goal scored. So the shootout had to decide about gold and bronze medal game. And for the GWS KMH coach Mika Väärälä decided to change the goalie – for Zsofia Toth Maude Levesque Ryan came in. Nevertheless after four shooters MAC was leading again and so had two chances to do the qualification for the final game, but did not manage it. And after 16 penalty shots the winner was KMH. So the titleholder has still the chance to defend last season’s title. 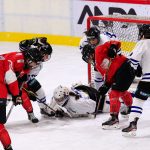 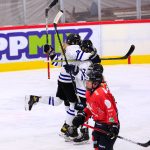 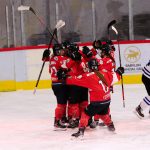 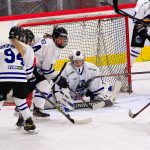 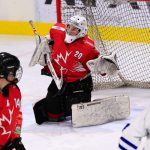 Also the second semi final showed a big fight between SKP Bratislava and the Sabres Vienna. The Slovaks were leading 2-0 – the Austried equalized the game with the 2-2. In second period the 3-2 for Bratislava. No goals for a long time in last 20 minutes. And then the game became really dramatically: 203 seconds before the likely end of the game 2 minutes penalty against the Sabres. SKP had everything in their hands to decide the game finally, but they did not do. At 58:58 2 minutes against Bratislava. Vienna pulled the goalie, tried everything… and scored the 3-3 at 59:49. In the overtime a breakaway from SKP – Sabres goalie Luggin saved the puck. And in the direct counter attack a breakaway from Sabres. Tripping from behind and penalty shot. There Anja Trummer, who had already scored the third goal stayed cool and did the game winning goal to bring her team to the game for gold. 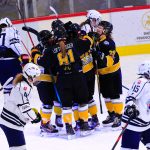 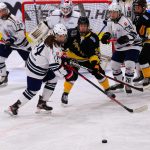 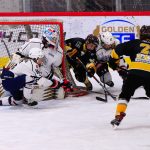 So on Sunday at 10.30 a.m. Bratislava will play against MAC Budapest for the bronze medals. The game for gold will follow at 1.30 p.m. – there KMH Budapest who won the Championships in the last 2 seasons will play against EHV Sabres Vienna who are the EWHL record champions with 6 times gold in total. And after these great semi-final games we all can look forward to great finals…

But not only the top 4 teams had games – there was also the Austrian duel between Eagles Salzburg and KEHV Lakers. Here Salzburg succeeded with a clear 6-1. And so tomorrow‘s game between Eagles Bolzano and the Lakers (1 p.m.) will decide about 8th and 9th place in the Final standings.